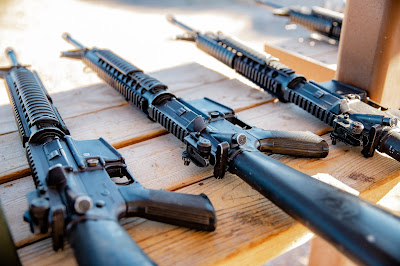 For “gun rights advocates,” let me say up front: I'm not anti-gun. Anybody who tells you that “they coming to take your guns away,” is lying to you. That is propaganda spread by the National Rifle Association, which was taken over by a radical right-wing political movement in 1977. Their industry-backed propaganda hasn’t changed.

I'm for sensible gun regulation as allowed by the Second Amendment and affirmed multiple times by the Supreme Court over two centuries, including conservative Judge Antonin Scalia in the 2008 Heller decision. The "gun rights" argument is not what you think.

Right now we have leaky, ineffective gun regulations. Strike One. Enforcement of gun regulations has never been fully funded. Strike Two. People keep committing mass murders. Strike Three. This is wrong. It reflects a lack of character on our part. We need to step up and do something.

All sensible people agree that we need to close the gaps in gun regulations and enforce the law better, including adequate funding for law enforcement. I’m for actually and fully funding enforcement, which has never been done. Instead, we fund assault vehicles for the police.

Yes, this would be inconvenient to gun owners: That's called "being responsible." Unless you have a pre-teen mind, you crave responsibility.

So, if you’re not a right-wing extremist who protects the rights of violent criminals and the mentally ill to own and operate guns, here is what we can do to restore gun sanity (like we had until 1977, only an updated version).

Main Goal #1: Create a national database accessible by law enforcement at every level. Cross-reference three data sets (1) A list of all guns and owners. (2) A registry of people with a record of violent criminal activity, including domestic violence and engaging in street/bar fights. (3) A list of people with mental health issues who are at risk of doing harm to self or others.

By cross-referencing these data sets, we can pinpoint when violent or mentally ill people are in proximity to guns. Laws and law enforcement should ensure no access to guns by these people. This used to be the law in the United States until the NRA went radical.

Yes, make gun owners responsible to secure their guns and report them missing. Failure to do so should be criminal.

Every gun owner should be required to be trained and licensed just like we do with car drivers. Training would include an hour on identifying people with violent tendencies or mental health issues. It's called "being responsible." This is a national safety issue.

Those who own a weapon that can be used in combat should be registered with the state or local militia so they can be trained in combat and recalled in time of need. This camaraderie alone would stem virtually all weapon abuse.

Main Goal #2: Since suicide constitutes the majority of gun deaths (with homicide a strong second), pass legislation to counteract the Root Cause of mental illness, drug use and most crime. The Root Cause is when an individual experiences a sense of social isolation or familial rejection, of not being heard and cared for. Yes, it's a weakness; but instead of kicking a person while they're down, we should give them a hand up. Implement proactive outreach programs in local communities to identify people who are struggling with mental health and violence issues, and to ensure clear connection points for them, including at schools, churches, jobs, and clubs. Shouldn't this be happening already?

Main Goal #3: Ensure these Goals are properly funded. (1) Until 2015, about half of gun registrations were on paper stored in boxes in the halls of the ATF. Computers and staff to manage them have never been properly funded. Industry lobbyists have blocked funding. (2) In Indiana alone we spend $1 Billion a year on drug treatment programs in prisons, just to turn convicts back out onto the streets into the same situations they came from with minimal community programs or support (according to my local county sheriff. Spend that same money on gun violence prevention, we could minimize violence and stem most crime.

Everybody knows: An ounce of prevention …  But these days we have people who have their opinions handed to them, who oppose common sense. It's way past time for the sensible majority to stand up and speak out.

Posted by Christopher Aune at 6:37 AM