How to put the resolve in your New Year resolution 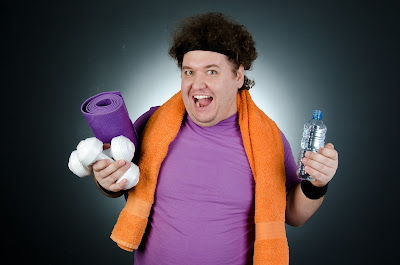 As you are getting started on your New Year resolution, remember that a lot of people gave up on even setting a goal, much less resolving to do it. Don’t be one of them.

In early January at the YMCA, it gets really busy. A lot of people get a great start on their fitness goal. But by February, it gets back to normal. People make one of two mistakes, so they end up quiting.

1. They compare themselves to a shapely girl or muscular guy. They are being unfair to themselves. Just remember, that girl or guy was fat and out of shape a year or two ago. If you ask them, chances are that they have an inspirational story to tell about why they got into shape.

2. People do too much at the beginning, get stiff and sore, and then think they can’t do it. Instead, remember comedian Bill Murray’s movie, “What About Bob?” Bob suffers from multiple phobias that keep him from doing almost everything. Richard Dreyfuss shows up as a psychiatrist who wrote a book, Baby Steps. Bob starts doing everything in tiny steps, and eventually overcomes his phobias. It's heroic and inspirational.

It worked for me. In 2000, I suffered from chronic fatigue syndrome. One day I was laying on the living room floor watching TV. I struggled get up. I had to roll over onto my belly, get up on my hands and knees, crawl over to a chair, climb up the chair, and carefully balance myself until I could stand. I was severely depressed, at times suicidal.

In my online searches, I found out that working out would help me beat the fatigue, as well as the depression. So, I decided to try it.

The first day, I went shopping for some workout clothes. That’s it. I laid them out on the dresser for the morning.

The second day, I tried them on and went downstairs out on the porch. I stretched a little, and went back inside and changed. I felt a little embarrassed.

The third day, I got dressed, stretched and walked one block down the street and back. I decided; I was determined to do this.

The next day, I walked three blocks down and back. Not much, but just a little more.

During some winter days, it got too cold to walk outside, so I joined the YMCA. I figured it was a lot less expensive than the medicines I was on; and if I could beat the depression and fatigue by working out, it was more than just savings.

But some days the fatigue and depression knocked me down. Some of those days, I just gave up. But other days, I dragged myself up and did something. Just a little. Just to be able to say that I worked out. It wasn’t a little more. In fact, it was a lot less on those days. But that was okay. I figured out that some days I just need to take it easy on myself.

But the day following a down day, I tried to at least equal my earlier workout. If I didn’t make it, fine. At least I made a good effort.

Sometimes I even skipped two days, but the third day I was feeling sick and tired again; and I knew how to fix it. Workouts – even short workouts – always made me feel good!

Now, it’s 18 years later. I work out most days every week. I don’t worry about missing one day; but if I’m down for a second day, I know I’ll feel a lot better if I just get out and walk.

When I’m walking around the indoor track, I see a lot of new people show up in early January. Sometimes I get to say “Hi”; and when I do, I always encourage them with that Woody Allen quote.

“Eighty percent of success is showing up.” – Woody Allen

Nowadays, I usually walk and lift some light weights; and this year I started doing some tai chi. Believe it or not, the tai chi made me aware that – despite walking – my legs were weak and that left me off balance. So, I do some leg presses on machines and deep squats holding onto a rail. I immediately put on some muscle mass, which increased my weight; but that’s okay. I'm much stronger now and have better balance. It motivated me to learn how to fast (on DietDoctor.com, recommended).

But I didn’t get there the day years ago when I crawled up that chair. This is 17 years later. My goal is still to just show up. Once I get going, it gets easier fast. I feel so much better all day, and usually for a couple of days.

I don’t count laps, miles, minutes, weight or anything. I might get curious, so I’ll check some number. (I lost 40 lbs. over the last five years.) But I never worry about it.

And guess what!? I only experience depression rarely and mildly! That is huge for me.

“It does not matter how slow you go as long as you do not stop.” – Confucius

“Success is just beyond the splat.” – Unknown Amway distributor who was probably quoting somebody else

“Success consists of getting up just one more time than you fall.” – Oliver Goldsmith

Posted by Christopher Aune at 10:42 AM 2 comments: