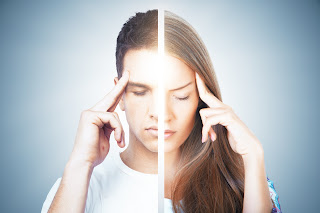 In a private post, a friend was talking about his experience of depression. I was lightning-struck by his description because, in describing his challenges, he so aptly summarized my own theory of the root cause of depression.

“… accepting that [depression] is a part of me,” he said. No, it’s not. It’s your natural and perfect reaction to the suppression of your true self, your identity. “I wasn't myself,” he said.

However, like most people, he can’t really hear what he’s saying. If he could, he would have a solid understanding of how to recover.

The root cause of depression and anxiety is a disconnect from your true self, a denial of your true self so as to meet the family, school, church and societal expectations.

It is denial of who you are to avoid rejection and achieve acceptance. It’s an identity crisis, with a totally normal and understandable physical-emotional reaction of either withdrawal (depression) and/or anxiety (fighting back). In the identity crisis, sometimes both.

“Recovery … is a very nice place, … and you're not treated as a patient but as a person.”

“I'm also struggling on daily basis with the pressure, expectations, and loneliness as a man ….”

“… society making it less a taboo and stigma around sharing and expressing your thoughts, feelings, and emotions as a man.” Which is our culturally mandated masculine role, trained into us from infancy.

I repeat my earlier comment: The root cause of depression and anxiety is a disconnect from your true self, a denial of your true self and everybody else so as to meet the family, school, church and societal expectations. As it applies to men, I’ve studied masculinity for two decades. If masculinity is a “monstrosity” (it’s not), then society is the Dr. Frankenstein.

Let me go a little deeper with what I’ve learned.

First, realize that male and female are sexes, and masculine and feminine are genders. Don’t confuse the two. Sex if a physical attribute, that varies in many ways. A rare few women are born with penises. Some women have more testosterone than an average woman, and some men have more estrogen than an average man.

Genders are social attributes (not traits, but a tendency toward a certain behavior pattern) that our culture associates more with one sex than the other sex. People of both sexes display both masculine and feminine gender attributes. Some parents expect engendered behaviors to be strongly associated with a certain sex. Other parents are open to some of both gender attributes despite sex. And some few parents actually teach their children to embrace attributes from both genders; and amazingly enough, those who rank high on both feminine and masculine attributes are consistently more successful in life.

There have been scientific research and meta-studies that have clearly shown how people of both sexes assign certain word descriptors to one sex or another: gender is well defined. Most people think of gender in terms of a single scale with masculine on one end and feminine on the other end. Not so! Masculinity is measured separately from femininity: two scales. So, any individual can rank as high masculine, low feminine; high feminine, low masculine; low masculine, low feminine; high masculine, high feminine; or any degree of magnitude in between.

Vice versa, 75% of males rank above average in masculine descriptors and below average in feminine descriptors, but 25% of men average higher in feminine qualities than masculine.
But this is all a statistical generalization! Every individual is different, some ranking very high on both feminine and masculine scales, some not. Now toss in familial, social, spiritual and political values, and immensely diverse life experiences, and we find that everyone is unique!


Which leads us back to my original assertion: The root cause of depression and anxiety is a disconnect from your true self, a denial of your true self so as to meet the family, school, church and societal expectations. More and more, society is trying to force use into categories, wherein we just don’t fit. - Christopher Aune, November 2017
Posted by Christopher Aune at 10:25 AM No comments: